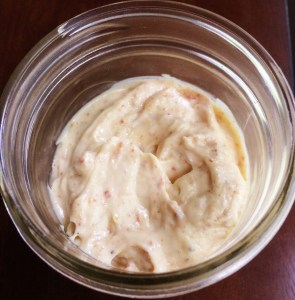 Place 6 cloves of garlic (peels still on) on the foil and drizzle with a little olive oil and a small sprinkle of kosher salt. Fold the foil into a packet and place in the preheated oven. Roast the garlic in the oven for approximately 35 minutes or until the garlic is soft and slightly browned. Let the garlic cool for a little while before removing the cloves from the peels and smashing and chopping until the garlic is in small pieces.

Fry the bacon over medium heat until browned and crispy. Drain the bacon on a paper towel and reserve the bacon grease.  Once cool enough to handle break the bacon into small pieces.

Place egg yolk, water, lemon juice, mustard, and salt at the bottom of the cup.

Pour the bacon grease into the spouted measuring cup and then pour in the olive oil until 1 cup of oil is reached. Pour the oil on top of other ingredients in the blending cup.

Let all the ingredients settle for 45 seconds.

Place head of the stick blender all the way at the bottom of the cup. Switch the blender on and slowly lift the head of blender and tilt as necessary until all the oil has been emulsified.

Mix in the garlic and bacon pieces into the mayonnaise until well combined.